Like the California roach that I wrote about in a recent edition of Creek Chronicles, the threespine stickleback is a native fish here in Corte Madera Creek. Sticklebacks are small and indistinct but when inspected a little more closely an interesting and endearing little animal emerges. Some of these interesting characteristics are physical and behavioral traits unique to sticklebacks but their adaptability is another trait, and one that has helped sticklebacks become widespread across the Northern Hemisphere in rivers, lakes and oceans and common in research aquariums.

Threespine sticklebacks typically grow to about two inches in length. Their mouths are at the front of pointy, downward-sloping heads, and their bodies taper back to a narrow peduncle, where the tail fin attaches. This parallelogram shape and a pair of large eyes helps them hunt for food, especially at night. Stickleback diet includes bugs, larvae, eggs and other smaller fish. Their three eponymous spines are the foremost rays of their dorsal fins. These spines, along with bony side plates, are used for protection against predators. The spines are not particularly hazardous to people, but can be locked into an upright position making it hard for larger fish such as a trout to swallow them. Stickleback’s pectoral fins extend out sideways and flap often while the fish hovers, otherwise motionless, in the water. This behavior is reminiscent of their distant relationship with seahorses. 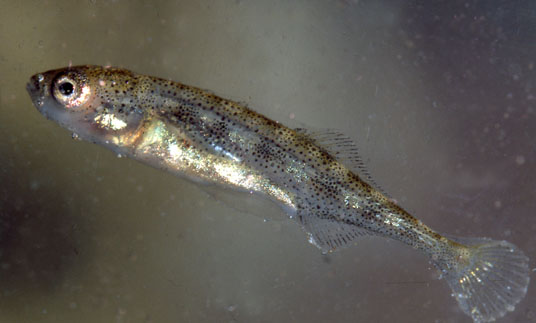 The threespine stickleback is the most common fish in our creeks. Photo by Charles Kennard

Also like seahorses, males do the domestic and childcare work in stickleback society. During the non-breeding time of year, sticklebacks form loose shoals, which is a less organized grouping than a school. In the spring, males turn red and branch off to build a nest out of vegetation and sand that is glued together with a sticky secretion. If courtship is successful, the female follows the male into the nest where she lays eggs and then he fertilizes them. The female then leaves while the male incubates and guards eggs, and later, fry. Until the young fish are large enough to school with other small fish, the males are diligent caretakers, often slurping up wanderers in their mouth and spitting them back into the nest.

Threespine sticklebacks are known for developing distinctive physical forms and adaptive life histories in response to different physical conditions. They can function at a wide range of ambient temperatures and are capable of living in freshwater, saltwater, or a combination. The population in Corte Madera Creek seems to live in the estuary and ocean as adults, but come upstream to the freshwater to reproduce. In places where populations are cut off from certain predators, such as inland lakes, they rapidly evolve to lose their spines and bony plates. Conversely the brook stickleback of the Great Lakes region has five spines and there is even a ninespine stickleback along the Atlantic that can have as many as a dozen spines.

A fish resources report contracted by Friends of Corte Madera Creek in 2000 contains clues about the behavior of the local population. A. A Rich observed sticklebacks in Corte Madera Creek, San Anselmo Creek, and Sleepy Hollow Creek, but not in Ross Creek, Fairfax Creek or Cascade Canyon. In Sleepy Hollow Creek, sticklebacks were the dominant fish species and reached their highest concentrations at almost two fish per square meter. This report also noted that the sticklebacks were all young of the year, reinforcing the idea that the fish are only using the stream for breeding and for the first year of growth before migrating down to the estuary. 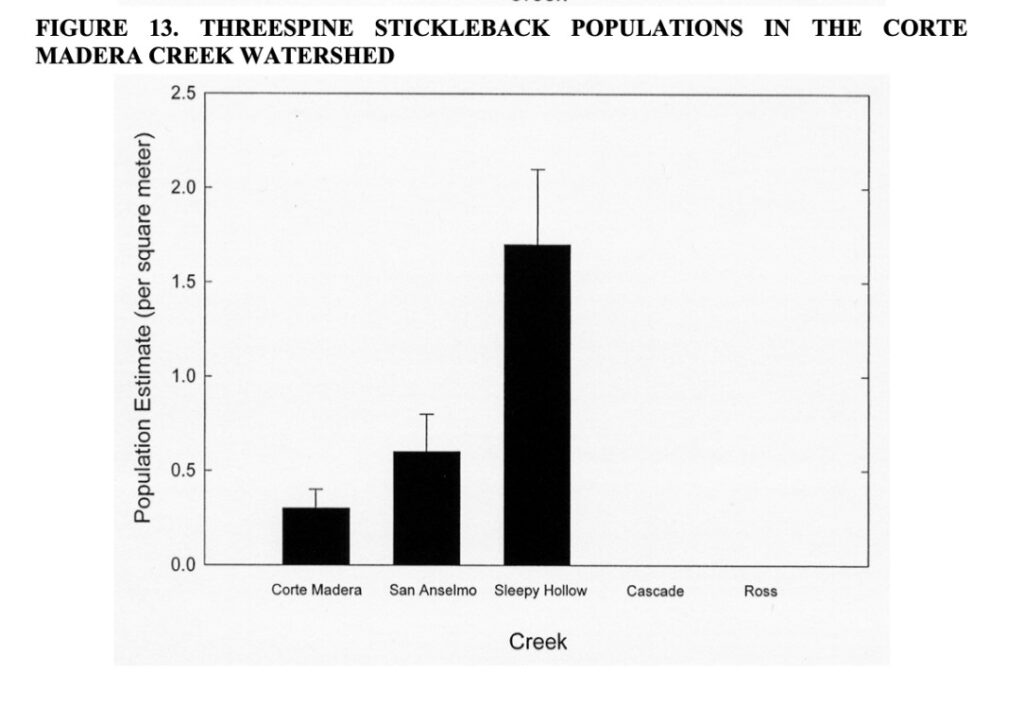 To see a stickleback, grab your snorkel and head down to Sleepy Hollow Creek. If the lighting is right, standing near a pool with a pair of binoculars works quite well. As a last resort one can find them in Fisher-man’s Wharf at the Aquarium of the Bay in the ‘Rocky Shore’ and ‘Oddly Shaped Fishes’ tanks.