One Across, One Down: A Help Up? 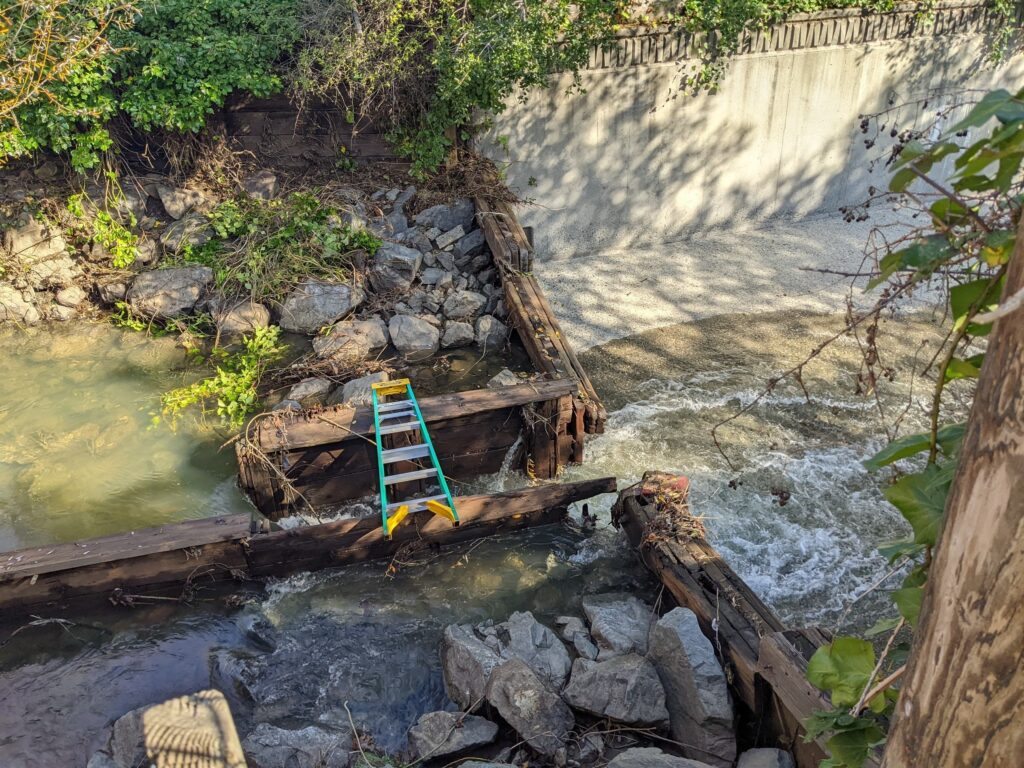 The broken wooden fish ladder behind Ross post office, long obstructing migrating fish, may be removed, after many studies of flow dynamics, property issues and environmental concerns. This is the interface that launched a thousand sheets. Photo by Matt Smeltzer

Improvements to the Concrete Channel

The Coastal Conservancy is a California state agency, established in 1976, to protect and improve natural lands and waterways, to help people get to and enjoy the outdoors, and to sustain local economies along California’s coast. It acts with others to protect and restore, and increase public access to, California’s coast, ocean, coastal watersheds, and the San Francisco Bay Area. Its vision is of a beautiful, restored, and accessible coast for current and future generations of Californians. More about the Coastal Conservancy’s program can be found at the Conservancy’s website at scc.ca.gov. Information about the Marin Community Foundation can be found at marincf.org.

The project illustrated below would create approximately 0.6 acres of new tidal and wetland habitats and 0.8 acres of new riparian and upland transitional habitats by removing or lowering approximately 625 lineal feet of concrete flood channel wall. Importantly, the new habitats would use appropriate native vegetation and be designed at elevations that would accommodate sea-level rise so they would be resilient to climate change. The 65% designs will be prepared in Fall 2020 and used to seek construction funding.

Other notable project elements include: 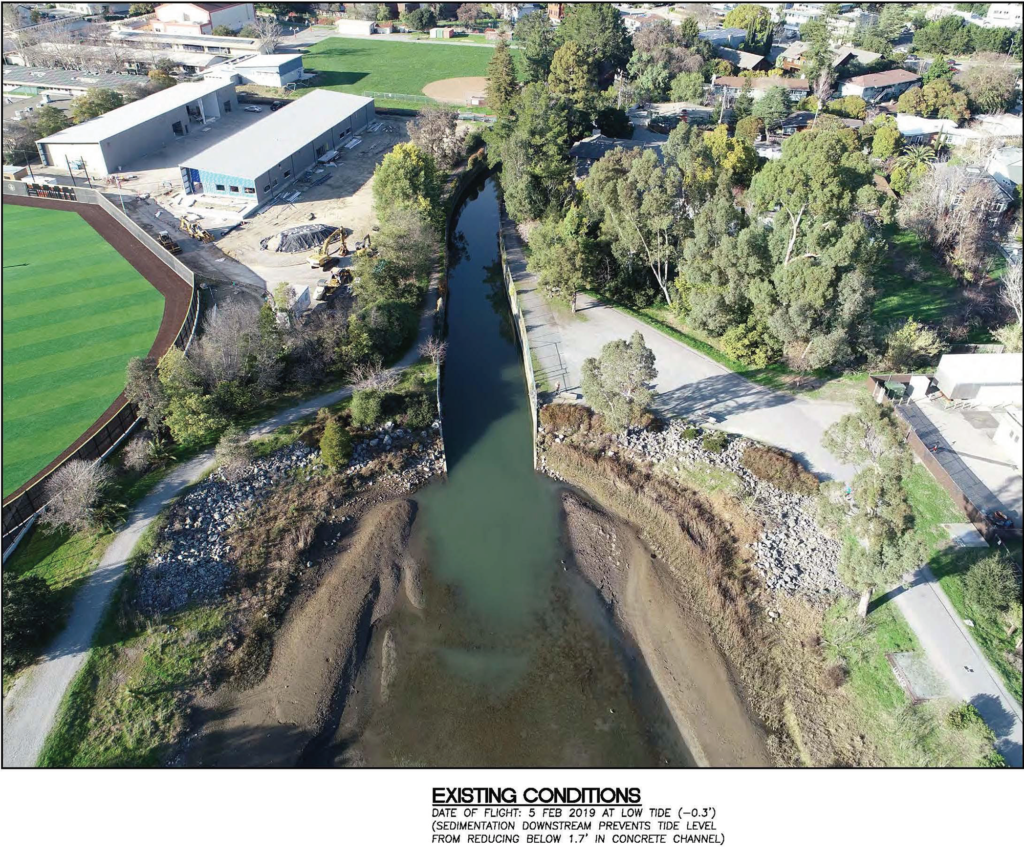 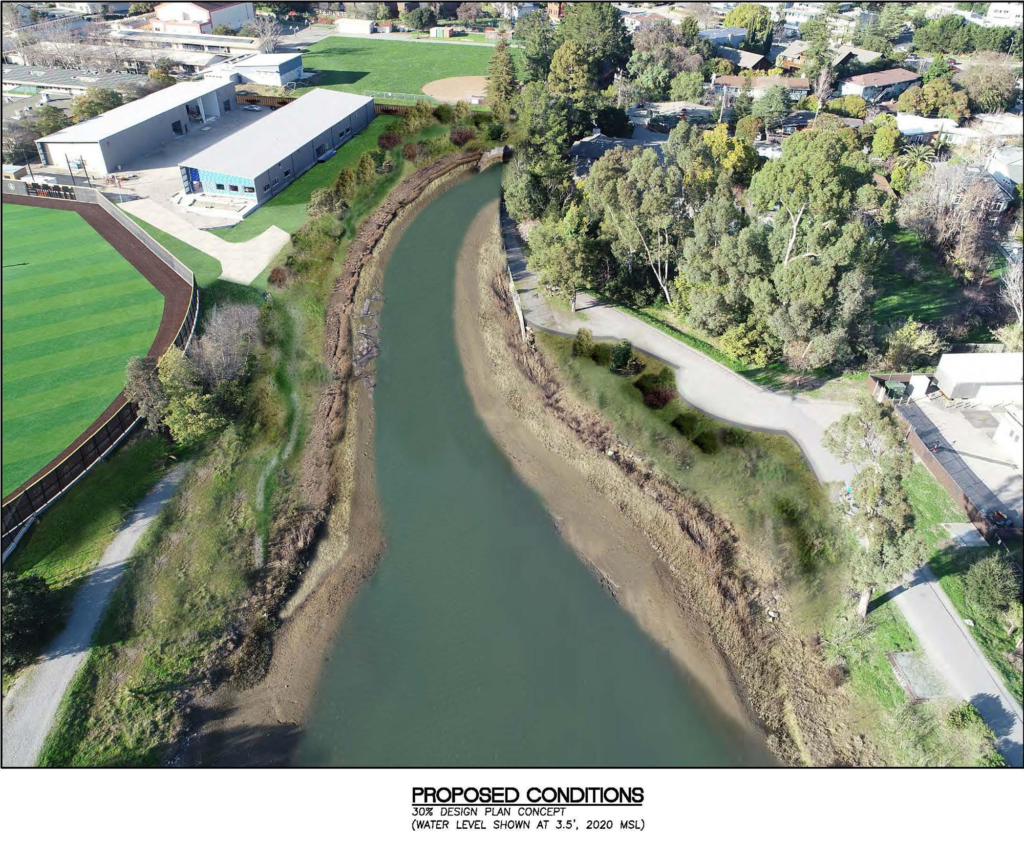 Michael Love & Associates (MLA) evaluated the use of new, larger resting pools to improve passage success within the concrete channel in 2007. The analysis identified two configurations of pools that would provide low velocity zones suitable for steelhead to rest at all fish passage flows and that would minimize sedimentation. One was better for straight reaches of the channel and the second better in curved reaches. Current efforts are responding to an additional complication: more water needs to be accommodated in the concrete channel to reduce flooding. MLA and engineers from GHD, consultants working with the Flood Control District on the project, are designing measures to meet all three objectives. The 35% designs are expected in mid-2021.

They Must be Bats!

In mid-April, just after noon, two bat rays (Mylobatis californica) were spotted in the McAllister Avenue slough, a remnant of Corte Madera Creek’s original alignment, just downstream of the concrete channel in Kentfield. Every spring these rays gather in the shallow warm waters of coastal California’s bays and sloughs to feed, mate, and give birth. The creature’s wingspan can exceed five feet. Photo by Nick Salcedo

So Much Pickleweed, So Little Time

In late March, students from Professor David Larsen’s class pursuing Environmental Studies at CSU East Bay helped plant pickleweed at Creekside Marsh, one of Friends’ habitat enhancement projects. Earlier in the day, the class was given a tour of Corte Madera Creek and a sewer pump station by the Marin County Flood Control and Water Conservation District and the Ross Valley Sanitary District, a funder of the planting project. Photo courtesy of Ross Valley Sanitary District. 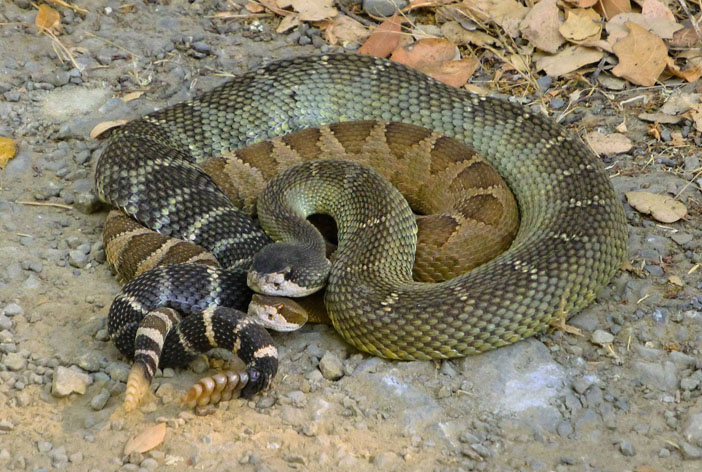 Otter on the Lookout 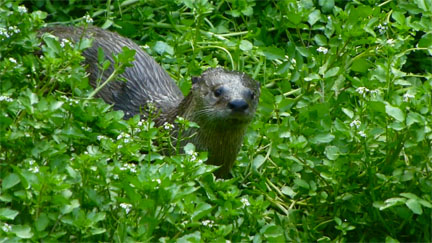 This lone river otter explored the deep pools at a bend in San Anselmo Creek in Fairfax for about half-an-hour before deciding to go and see what lies beyond the watercress upstream. Photo by Gary Leo. Local otter sightings can being recorded at riverotterecology.org. To view a video by Gary, download: River Otter 6 1.4M

Make a tax-deductible financial contribution via PayPal or by sending a check to Friends of Corte Madera Creek Watershed, PO Box 415, Larkspur, CA 94977 Thank you! If you shop at Amazon, Friends will receive a donation of 0.5% of the purchase price when you make your purchase using Amazonsmile. smile.amazon.com/ch/68-0365270

There are no upcoming events.

Contact us via email with news of events of interest, wildlife observations. or your concerns about our watershed.