Friends of Corte Madera Creek Watershed strives to ensure that we can safely use our creek for recreation, and that fish and wildlife have the high quality habitats they require to thrive. To this end, our volunteers have participated in the following activities:

A.A. Rich and Associates installed and monitored thermographs that recorded water temperature during the summer of 1999, as part of a fishery resource conditions study.

For several reasons, the bacterial sampling effort has been discontinued. First, because of the complex nature of the watershed (tidal and non-tidal), we were not able to identify the source(s) of the high bacterial counts. Second, it is time-consuming and difficult to organize a high quality, all-volunteer effort and we could not continue to provide that level of commitment. Third, we attempted to obtain funding to implement a professional sampling effort, designed to identify sources, but we have not been successful. We would like to continue the program when funding is available.

Volunteers measured temperature, pH, dissolved oxygen, and specific conductivity in San Anselmo Creek at Bridge Avenue from June through October 2008. For reports on the results of these projects see:
BridgeT_DO.pdf (632 KB)

Volunteers measured temperature, pH, dissolved oxygen, and specific conductivity in Ross Creek and Phoenix Lake from May through October 2008. For a report on the results see: RossCreekPhoenixLake2008.pdf (644 KB). For a report of temperature and dissolved oxygen testing done during 2012, see WQ2012Report.pdf (940KB), and for several creeks during 2016, WQ2016Report.pdf

During several summers, we noticed a degradation of water quality in upper Ross Creek during the summer when flows are low. During 2011, water samples were collected on three days, about a month apart, at four locations covering some 1,600 feet of Ross Creek. For comparison, one sample was collected from San Anselmo Creek at Creek Park, upstream of the confluence of Ross and San Anselmo creeks. Download the technical report describing the results here: FeMn_Report_2011.pdf (4300 KB). A summary of the report is in the January-June 2012 issue of Creek Chronicles. 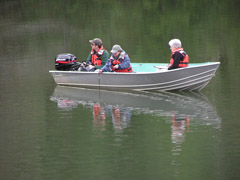 Measuring water temperatures in Phoenix Lake with a Hydrolab.Photo by Tom Guldman